The story of 66-year-old Geraldine Largay’s adventures on the Appalachian Trail and what led up to her tragic death is unusual. There were many accounts giving information which would seem to contradict her behavior…and so many missed opportunities. It didn’t have to end in death …and it was never meant to end in death! A lover of the outdoors and seeking adventures past a dedicated career should reflect new chapters of enlightenment and excitement…not disaster.

Geraldine began her training to navigate the wilds of the Appalachian Trail with a trainer who had the reputation to be unorthodox in his methods, according to an article by the Portland (Maine) Press Herald. Her mission was to cover 14 states, encompassing roughly 2,175 miles.   She nicknamed herself “inchworm” as her trail name. She and friend Jane Lee began on April 23, 2013, trekking ~1,000 miles from Harper’s Ferry Virginia. As of June 30th the women were in New Hampshire whereupon, Jane left to lend to a family emergency.  This was the beginning of flirting with a disaster which would create a domino effect of trouble ahead. Geraldine was insistent that she continue on alone. Actually, the system in place was to have her husband of 42 years act as a kind of “wagon train” meeting her at pre-determined spots, bringing her supplies and driving her to motels for showers etc.

Geraldine’s body was found less than two miles from the trail 26 months later by surveyors on October 14, 2015, in Maine.

I really tried to find an equal balance of positive and negative factors to relate, thinking that this was just a fluke that this woman went missing, seemingly forever and then died. But, no, the negative far outweighed the positive in this tale.

Gerry was a retired nurse whose medical skills would supposedly serve her well for such an ambitious trip. She was a friendly person on the trail, not “keeping to herself.” She had the physical stamina to carry a full pack, hiking 16 miles a day.  She also kept a journal after she got lost that provided insight into her journey (as well as over 1,500 pages from the Maine Warden Service and the Medical Examiner.) 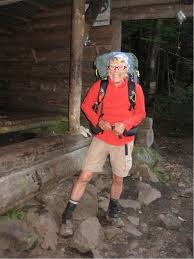 Human error, poor judgement, the harshness of the terrain,  over-reliance of certain equipment and not using other techniques, lack of survival skills taught by her instructor, (no curriculum to speak of) and  a medical condition and her family’s lack of knowledge of just how unprepared Gerry was, all contributed to this “perfect storm.”

In summary some of the factors that worked to create this tragedy were:

Gerry left the marked trail to go to the bathroom and lost her way. According to experienced hiker David Miller quoted in the National Post, he stated that as part of the maintenance of trails, the Conservancy re-routes paths yearly after floods or restoration projects. New paths are cut and they attempt to block the old paths, but the “blazing” – looking like paint on trees, is not adequately removed and mistake the old route for the new routes,

Largay did not follow her instructor’s informal advice to go “Downhill and downstream.” This instructor also recommended that if lost, you should stay put and do nothing.  Maine investigators have disagreed.  Instead, Gerry tried to go to higher ground hoping for a signal for her cell phone.

Gerry died in the summer within a sleeping bag in a closed tent, which ultimately made it difficult for search dogs to detect a scent through the air.

The Warden Service was able to conduct three dog searches only due to the lack of volunteers able to navigate the harsh terrain that had been used by the military in the past.

The medical examiner’s report stated that her last campsite was a mixture of hardwood and evergreen with a tree canopy covering  75% of the campsite from above (with a black tent) which made visibility from the air and the immediate surroundings very challenging. She waved her shirt to a passing plane and helicopter, but she could not be seen.

Her path to the end – Several accounts report that she was last seen on alive on July 22, 2013, on Polar Ridge lean-to. As there have been torrential rains afterward, speculation was that she had trouble crossing the Carrabassett River or “got turned around on the trail.” Evidence from the Computer Crime Lab indicated she had gotten to an abandoned railroad bed crossing and the Orbeton Stream.   She missed her scheduled stop to meeting her husband for supplies in Wyman Township. She continued north but reported left the trail to go to the bathroom and got lost.  This area was very dense with fir trees, rugged with thick underbrush.

In fact, Gerry was found less than two miles off the trail and waited a full month for rescue before dying officially from Inanition (exhaustion and lack of food and water).Some of her remains were intact within the sleeping bag, while animals scavenged and dragged her a few feet away.

Before the month passed, Gerry appeared resigned to death, with her journal messages, following her failed text messages to her husband. The cover of the Journal said, “George, Please Read X0X0”

At 11 a.m. on her final day of hiking, her unanswered text said, “In some trouble. Got off the trail to go to br. Now lost. Call the Appalachian Mountain Club to c if a trail maintainer can help me. Somewhere north of the wood road. X0X.” She prayed the Rosary too!

On August 6th she wrote, “When you find my body, please call my husband George and my daughter Kerry. It will be the greatest kindness for them to know that I am dead and where you find me.  No matter how many years from now. Please find it in your heart to mail the contents of this bag to one of them.”  She also wrote a long letter to each of her family members, apologizing, saying that, “No hike was more important than them.”

I have many questions about why  Gerry was so ill prepared and why her family agreed to this vagabond system of travel agreed to, for a woman with an anxiety disorder without medication, without sufficient survival training and someone who did not like to be alone.   We’ll never know why so many common sense factors went by the wayside for Gerry! It is sad and senseless. Perhaps she was a loveable but “stubborn ol’ broad” who didn’t like to listen to others.

P.S. Gerry was less than 200 miles from completing her goal of 900+ miles –half of the trail that she began in West Virginia months before.