The Best Kept Secret: The Crime of Abandoned Babies

“Babies don’t deserve to be thrown in the garbage like the scrapings off the plates of the Thanksgiving dinner.”  Connecticut Superior Court Judge Robert Delvin, Jr.

“Cost neutral communication options” is the term used since April 2010 from the Connecticut Department of Children and Families and legislators when it comes to the “throw away behavior” concerning babies born to girls who are not prepared to be parents.

The Law in Connecticut:

The Safe Haven Law was enacted in year 2000, in part as a result of a case occurring in Cheshire, CT in November 1995 with a conviction of second degree manslaughter.

5.1-4 Manslaughter in the Second Degree — § 53a-56 (a) (1) Instructions to a Jury:
“A person is guilty of manslaughter in the second degree when (he/she) recklessly causes the death of another person. For you to find the defendant guilty of this charge, the state must prove the following elements beyond a reasonable doubt.  In summary, the state must prove beyond a reasonable doubt that 1) the defendant caused the death of <insert name of decedent>, and 2) the defendant’s actions that resulted in the death were reckless.”

In summary, infants 30 days old or younger can be brought to a Safe Haven (defined as any hospital emergency department). A nurse will meet the parent in a private room to obtain medical history (if the parent choses). Parental rights will be terminated in order for the baby to be adopted, and they will be given a packet from DCF. DCF will assume immediate custody of the infant. If the parent changes her/his mind, it is recommended that they immediately contact DCF and apply for legal representation.

Parents who do no harm to their infant, cannot be criminally charged with abandonment if they use the Safe Haven law. 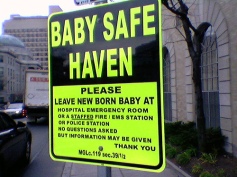 House Bill 5793 “An Act Establishing Safe Haven Day” would designate April 2nd each year to promote increased awareness of the Safe Haven law and dedicate the day to discussion and promotion.”

This is where the cost neutral portion intersects with real life. Although it may make legislators “feel good,” in my opinion, it is like emptying the ocean with a teaspoon to devote a sole day to discussing this issue! Unwanted babies may give rise to a missing person’s status, or intimate partner violence or human trafficking situations and can ultimately lead to homicide.

“No cost to the State methods” includes group discussions re ways to better promote, use of social media and perhaps locating a volunteer videographer to create a documentary in which these girls can “tell their stories.”

EAST HARTFORD — Detectives are investigating the death of a baby whose body was found in a trash can outside a Tolland Street home Tuesday night.

Police were dispatched to 1047 Tolland St. at 8:30 p.m. Tuesday for a check welfare call and after checking the area found an infant’s body in an outside trash can, police said. The child had been born recently. East Hartford paramedics pronounced the newborn dead.

Sgt. Michael DeMaine said police went to the house after a doctor at Connecticut Children’s Medical Center called them to report that an 18-year-old woman arrived at the hospital showing signs of giving birth, but without a baby.

In the Beginning:  Connecticut

It was in the picture perfect town of Cheshire that an unforgiveable crime was committed in 1995 by a 16-year-old Cheshire High school girl named Amanda Beckett. She became pregnant by her boyfriend in February 1995, “but never consciously acknowledged she was pregnant  or sought help.” She was approached at school about the possibility of being pregnant and if she was in denial.

Her mother, Barbara, was a pediatric nurse and still did not recognize any signs of pregnancy. The defense attorney claimed Amanda may have mistaken her labor pains for menstrual cramps.

On the afternoon  of the birth, she stayed home from school and then realized she may be pregnant when she went to the bathroom.  Police presented a probable scenario that she was helpless, afraid and traumatized for about ten minutes, retrieved the baby from the toilet,  and slapped its buttocks without response.

The Medical Examiner ruled that the baby was born alive and remained so “for just a few minutes” dying of asphyxiation with drowning and contusions.

Reportedly,  Amanda “meticulously cleaned up the scene,” double bagged the baby and threw her son, Joshua Paul, away  “like trash.” Beckett returned to school the next day and even attended a football game as if nothing occurred!

When questioned by the police, she denied the baby was hers and tried to divert their attention away from her and actually named four other high school girls she believed to be pregnant! Her son’s remains were located weeks later at the Resource Recovery Center in Wallingford.

Beckett was an “unsophisticated criminal” who also left a cut up credit card in the trash bag that was traced to her. She was arrested in December 1995 and charged with first degree manslaughter under the Alfred Doctrine, not admitting guilt, but conceding there was enough evidence to convict her.

The  baby deserved to have a life and because the offense is so serious, punishment is warranted.  The Sentence in 1997 was 18 months in prison and five years probation. BUT, the TRUE sentence served  by Amanda was only seven months!

Her tearful response in court: “I’m just sorry for what I did. If I could change it, I would.”

There was a “small noise coming from a dumpster in Fairway Village, near Green Island Country Club on April 9, 2015. A newborn baby was trapped inside a plastic bag. Austin Detray located the baby and assisted his mother in reviving the baby.  Reported  two females were seen in a white car exiting the complex rapidly.

On April 11th 23 year old Shelby Harper Taylor was arrested for attempted murder And was granted a $10,000 bond and instructed “not to come in contact with children” until DCF approves.

Critics of the Safe Haven Law

(Year 2000) “They ensure no support for the women , ignore the role of the father and may encourage women to abandon if they are unhappy with its sex(gender) or if it has disabilities”

DCF may now offer more programs for the female offender in 2015, but then there are always more cuts to social programs. Should social media be the teacher here? Don’t trash your baby!

Supporters say if the effort saves but one life, it is worth the legislation and all efforts!

The Best Kept Secret: The Crime of Abandoned Babies