This docu-drama was created by French filmmaker Jean-Xavier de Lestrade depicting the real lives and death, gripping courtroom scenes and family gatherings following the aftermath of chronicling the case of author Michael Peterson, who was convicted in 2003 for the murder of his second wife wife, Kathleen.

Yes….. There are far too many Petersen murderers running about —Scott, Michael and Drew(allegedly).

However, the portrayal of this real life occurrence is done over a period of several months from several points of view and condensed into six hours of viewing. It is an intimate, unprecedented view of family relationships, raw emotion, secrets, legal strategies, expert consultations, courtroom drama and even international intrigue tying a previous “accidental killing” of the same type to this defendant.    It engages the viewer from the start with its storytelling abilities, cast of characters, timeline and musical offerings.

I purchased this film and have viewed it about three times. With each viewing I gather more insight into their version of events.  I am discomforted with the findings of the two renowned forensic experts from Connecticut.  However, as a biased homicide survivor, for all of its good qualities, I think it “bends over backwards” to represent Michael Peterson as the perfect husband with the perfect marriage.  In reality, his life and marriage was far from it… was far from it.  This film omits physical evidence that offers further proof of his guilt.

This family did survive the adopted, blended, divorced, inter-continental forces that would go against the making of a strong, but non-traditional family.  The viewer does have empathy for many of those involved.  In the beginning and in the end of the film, Michael Peterson comes off as a self-absorbed pathetic figure. 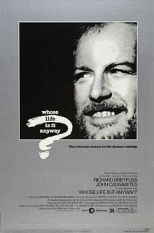 Whose Life Is It Anyway

This 1981 film discusses the most important ethical issue- that of quality of life versus death. However, it is portrayed with class, comedic elements and a group of the most talented actors ever.

Richard Dreyfess, Christine Lahti and John Casssavetes, along with a wonderful supporting cast, present the story of a man’s dignity and intellect as more important than the medical credo of “Thou Shall Preserve Life at all costs.”

Indeed, it defines what life truly is…  What is quality of life? Be sure to view the audio commentary first for insight. I must say the pairing of the Director and Musical Composer, Arthur Rubinstein was slow to say the least, as the latter is certainly not an articulate speaker, and far too technical in his description of the musical selections.

However, you realize that this film was ahead of its time, with many layers of relationships and touching scenes.

Out of the Ashes

Christine Lahti is absolutely magnificent in her skillful portrayal of Gisella Perl, courageous and skilled Jewish MD sent to the German prison camps. The story focuses on her family initially and weaves back and forth from present to past recollections. Gisella is forced to justify her actions as a means of survival in order to obtain a license in New York.

Although she doesn’t come from poverty, she lives it and is demoralized daily. In spite of her meager existence, she manages to save hundreds of women and keep her integrity. When she finally obtains her license, she continues her work until her death in 1988.

There is no doubt that this is an excellent film in every respect. The writing is provocative and the acting talents of all the cast is first rate. Set in the backdrop of the mid 1960’s, “Doubt” allows us a bird’s eye view of Catholicism doled out by a nun who rules with discipline and an iron hand…and heart.

Enter an innocent young nun who wants nothing more than to teach history and help her students. We also see the clash between the principal and her Parish priest, who takes a protective liking to “the first negro boy”.

Secrets are revealed, suspicions run rampant and tempers flare. Compassion, or lack thereof, and intolerance are main themes. This is not a slow paced film. The depth and expanse of Meryl Streep’s characterizations is truly amazing.  The ending is true to its title.  You will not know what truth is and what fiction is.View this film, at least once! DRG

I first became acquainted with the R & T series at my local library. Although it’s supposed to be about murder, the focus is the relationship of these two delightful women. The series is light, the interactions delightful and the European scenery just stunning!

Oh yes, and it’s highly implausible that two gardeners would “run into murder” at every assignment, just like Angela Lansbury of “Murder She Wrote.” They may imbibe a bit too much, but you would too, if you were constantly solving murders… They would be friends of mine if they were real people. This series is very enjoyable.