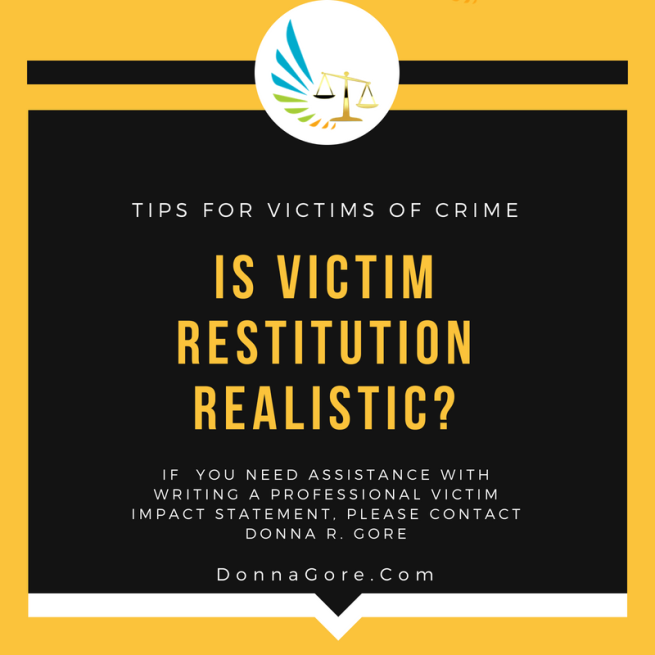 An overview of the Federal process begins with the Mandatory Restitution Act as of April 1996 Provisions include:

Typically NOT Included as part of Restitution-

Is Restitution Realistic? Is it Enforceable?

Realistic ?- You tell me…

Iowa judges ordered arsonists, thieves, murderers and other convicted criminals to pay a combined $159 million in victim restitution over the past five years, according to data obtained by The Des Moines Register. Yet, offenders’ payments during that time totaled only $19 million, or less than 12 percent of the new debts.

“PHOENIX — A Maricopa County Superior Court judge on Monday ordered convicted murderer Jodi Arias to pay more than $32,000 in restitution to the siblings of Travis Alexander, the man she killed.Arias, 34, who was sentenced to life in prison in April, did not attend the hearing.

According to Arias’ defense attorney, Jennifer Willmott, the restitution amount was about one-third of what the family requested as compensation for travel and lodging and other expenses related to Arias’ two trials.

Willmott said that she went through the receipts submitted by the family to arrive at the amounts awarded. She also requested the amount of money that the family had received in donations from trial followers to offset their expenses. They declined to reveal the amount.”

At the State Level – Connecticut as an Example –

Regarding restitution, the Office of Victim Services states, “If the court orders the defendant to pay your financial losses and the order includes expenses that were already paid by the Victim Compensation Program, the Program is entitled by state law to receive back all of the victim compensation paid for those expenses, unless the court orders differently.” (Section 54-215 of the Connecticut General Statutes)

Note – I was informed just prior to our April 25, 2018 parole hearing that the Department of Correction Staff I consulted had NEVER experienced a judge order restitution to  a felon of his murderous caliber in the staff person’s tenure of several years!

In my opinion, it matters not how little they earn in prison, whether it is $.75 cents to $1.75 per day. Such salary or a designated portion of their salary or commissary allotment should go to the victim’s family directly, a designated organization, or the Victim’s Compensation Fund.

In the foreseeable future a bit of progress will be made in the State of Connecticut regarding use of restitution, thanks to legislators’ passage on the last day of the recent 2018- legislative session.

Naysayers may say that it is merely, a “feel good bill,” record keeping bill, a reminder for the judge to ask if the victim requests restitution. This may be true, but  I’m not complaining because it is a start to help improve victims’ rights.

Public Act No. 18-128 AN ACT CONCERNING VICTIM’S RIGHTS AND RESTITUTION.

This bill requires the court, when sentencing an individual who was convicted of a criminal offense, to inquire on the record whether there are any requests from victims for restitution. Existing law, unchanged by the bill, requires the court to order an offender to make financial restitution, under terms that it determines are appropriate, if the:

Under current law, any such restitution must be imposed or directed by a written court order. The bill explicitly requires that the order be written on a form the chief court administrator prescribes. It also (1) requires the court to retain each original form containing a written restitution order as part of the offender’s court file and (2) makes a conforming change.