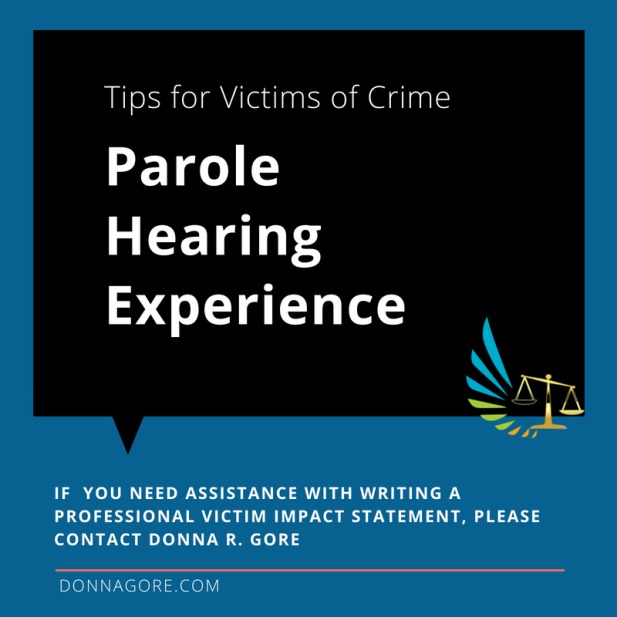 Obstacles Aplenty for the 2018 Parole Hearing  (What Has Really Changed in Five Years?)

There were numerous obstacles to be faced in my family’s second parole hearing, more than prior to the initial 2013 hearing.  It was disillusioning, frustrating, and served as a motivator for future change, which I hope will come to fruition.

Some of the obstacles intersected with inaccessibility issues left unaddressed. However, the multitude of issues were victim service/process related, and when combined with physical accessibility issues, created the perfect storm for me to create positive change, not only for my deceased father, but for other victims to come.

Many of the obstacles stemmed from a few major principles, if adhered to, would have made our experience so much easier –

Had a few simple principles been adhered to it would have made our experience, and other crime victims, much easier. Here are a few of the obstacles I was stunned to run into:

Breaking all of the above down to my personal experience, I’ve created this laundry list of hurdles we had to jump over while preparing for the 2018 Parole Hearing:

Solutions up for discussion

My possible solutions would not require legislative approval, nor a lot of money. Solutions would take a change in thinking, culture, and operation of state government. Simply put, I propose a change in communication styles, creativity and willingness to think outside the box.

The Victim Notification form which we received was so generic in nature as to be useless. It did not include the time of the hearing, how to look online for the cases by name or inmate number, no specific victim advocate, no directions for driving or  parking. This is basic information which needs to be comprehensive.

When I inquired, I was told by a Victim Services supervisor that this allows them flexibility if families do not respond or attend. To me, it shows lack of care, concern, and poor service.

One of my initial complaints is that all of the assigned entities, the Constitutional Victim Advocate, The Office of Victim Services, The Department of Corrections (Advocate, FOI Officers), and the Board of Pardons and Parole operate independently with little communication unless they are addressing a special, high-profile case.

If  Connecticut’s State Government refuses to consolidate or change its structure, then the best short term measure would be to create a one stop website, perhaps using our Judicial Branch website for reference, which has the reputation of being the best in the country. However, it must be able to contain pertinent information without becoming overwhelming to victims searching for details.

It’s vital to have a website that explains the different entities with links and phone numbers so that anyone can understand what to do, and who to contact within State Government. It should be clear, easy to navigate, and available in major languages. How would the average state resident know that most of the entities listed fall within different branches of government with different functions? They wouldn’t know, nor should they be expected to hunt for all of the programs and have to put it together like a jigsaw puzzle!

Crime victim families who are at their lowest and most emotional time in life should not have to be concerned with driving to single destination for all Pardons and Parole Hearings in Waterbury.  The building is located in the heart of the inner city, with inadequate accessibility, whether you have a disability or not. However, as a practice, the current building is used solely as a convenience to parole board officials, and not the comfort or convenience of crime victim families.

In 2018, the knowledge and technology exists and video conferencing is used for inmates. I repeatedly asked why not hold the meetings for the victim families in a comfortable conference room at an Office of Victim Services facility in the same county or major city nearest to where the family lives or where the crime occurred, whichever is closer.

The Board of Pardons and Parole, by nature, is to provide all of the  courtesies to the offenders which seems abhorrent to any victim family. To become more victim friendly would amount to communicating among departments and re-arranging a few things. Although upgrading technology that may not be compatible may not be inexpensive, it’s an investment that needs to be made for the future.

Another tool that is rarely used in Connecticut is financial restitution, whether pursued on the State or Federal level. I was informed by the FOI Officer that in his several years of tenure, he couldn’t recall a single case in which financial compensation was set aside from the prisoner’s salary or spending account. Not a single case!

Therefore, I’m proposing that our State mandate restitution from all felons in the form of contributing a portion of their pay ($.75 to $1.75 per day) or commissary allotment ($50.00 per month ) to the victim’s family directly or victim compensation fund. In addition, this fund could be earmarked for incidentals. As an example, I had to write a check for $.75 (they don’t take cash or cards) for photocopies, although I had to pay $11 to park for the 4.5 hours I was there.

Another important recommendation would be to clarify the issues surrounding victim notification. Although we are registered with all of the entities like VINE (Victim Information  & Notification Everyday) and the Department of Corrections Notification System, these systems are not connected and notifications aren’t always timed well. For example, when should we be notified, and will we be notified if the inmate is release to a halfway house or the community? If the systems were connected it would allow it to be streamlined for easier use by victim families.

Still another innovation that would go a long way to providing information and tracking would be to create  a Violent Offender Registry.  The model is being used in the states of Montana ( https://app.doj.mt.gov/apps/svow/ ) and Kansas ( http://www.accesskansas.org/kbi/info/docs/pdf/KORA%20Brochure%20September%202016.pdf). This has been questioned legislatively in Connecticut as far back as 2006:

“It appears that Connecticut could adopt such a registry. Connecticut has a comprehensive body of law regarding public access to criminal record information. The law makes conviction information generally available to the public. The public can access information by contacting the police department that conducted the investigation or the court that heard the matter. The public can also contact the State Police and pay $25 for a person’s criminal history record using either the person’s name and date of birth or fingerprints.

A violent offender registry would appear to be similar to a sex offender registry and the courts have upheld laws requiring sex offenders to register. In 2002, the U.S. Supreme Court made two rulings upholding sex offender registries. In one involving Connecticut’s sex offender registry, the Court considered a case where the lower courts determined that public disclosure and dissemination of the registry implicated potential registrants constitutional liberty interests, thus giving them the right to show that they were not dangerous before the department added their names to the public registry. The Court ruled that even if sex offender registration implicates a constitutional liberty interest, a question it found unnecessary to decide, it concluded that offenders receive all the process that is constitutionally required when they are given the opportunity to contest their guilt in the criminal proceedings. Whether or not an offender is dangerous at the time he is required to register is irrelevant under Connecticut’s law; thus holding a hearing on that question could not change the result.

In the second case, involving Alaska’s sex offender registry, the Court ruled that applying the registration law retroactively to offenders convicted before the act’s passage did not violate the Ex Post Facto Clause of the U.S. Constitution. The Court found the registration requirement non-punitive and therefore was not a retroactive punishment forbidden by the clause.

During our recent 2018 pre-parole conference,  I learned that they really had no idea the end date of parole for the perpetrator with his indeterminate sentence of 50 years to life as it was so rare that someone like him got parole in the first place.  What happened is that two months after the date of the first murder committed in April, 1981, the law changed and the perpetrator NEVER would have been considered eligible for parole with such a violent record of offenses.

Life is full of ironies. I remember looking at my brother at the end of the hearing  last month, as he shook his head and quietly said out loud, “Two months.”