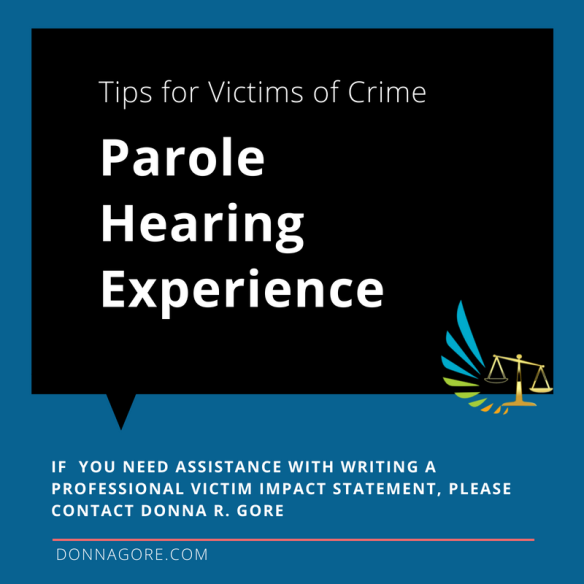 As my family and I neared the date of our first parole hearing in 2013, we realized there was much to do to be prepared. As you read in Part I  we weren’t given much notice for preparations to be made, but acquired the advice of an attorney and advocate who understands the law and the criminal justice system.

Part II of this series on Parole Hearing Experiences addresses the many things we needed to prepare, their importance, as well as what we accomplished because of our tenacity.

The Importance of Photos of Your Loved One:

The parole board has the benefit of a thick file containing the prisoner’s history and activities. They do not have a true picture of the victim, other than the circumstances of the crime. It’s critical to make our loved one come alive for hearing officers and  the perpetrator. As they say, a picture is worth a thousand words, and it did truly help in our case.

Printers such as Kinkos-Fed-Ex provide excellent services with photos for such purposes. They can create something lightweight, mounted on foam board with easels and reasonably priced. As we could not get clarification on the size of photos allowed, four sizes were made for about $20.00. We placed our photos strategically, one facing the parole board members and the other facing the TV monitor to be seen by the perpetrator and his family.

All families have different dynamics with dominant members who are able to take the lead. However, as with criminal trials, it is very important to have as much family representation as possible at the parole hearing. Therefore, we could not have the expectation all family members would have the opportunity to actually speak on the record. Some were there merely for support.

The Parole Board Chairman has the ability to say no to too many speakers at the hearing as multiple hearings are typically scheduled on one day. Therefore, if family members do not speak it is of great importance to have them submit a personal victim impact statement in writing to add to the record.

2013 was our first exposure to videoconferencing. The convicted murderer was in attendance via video, which is enacted as a means of saving transportation costs in the penal system.  The perpetrator’s father was present via video from a third location. I felt that this was a mixed blessing, as it would feel even more uncomfortable to sit in the same room with the murderer and his family. It was surreal. We were watching a very real reality TV.

Quite by accident, I learned that the customary three (3) officers presiding during the parole hearing nearly became two. One dropped out which could conceivably cause a tie vote when deciding the outcome. If that happened, the family would have to return yet a another day, lose vacation days, more time away from work, and more emotional turmoil. I was surprised that this was not brought to our attention immediately. We INSISTED that a third hearing officer be located so that we would not be subjected to the possibility of a tie vote.

The Key Concern and The Key Accomplishment: The Right to be Protected and to Remain Anonymous

All crime victims have the constitutional right to be reasonably protected. The perpetrator in my family’s case had an extensive and escalating track record of violent behavior. In fact, the Pardons and Parole Board’s website quotes a major study conducted indicating that such escalation is a strong predictor of further violence in the future.

“History is a strong predictor of future behavior – a pattern of early onset of crime, multiple incarcerations, prior breaches, and criminal versatility is all related to increased likelihood of future crime. Offenders whose crimes increase in severity are of increased concern.”

We were unable to ascertain if the murderer has access to the internet directly or indirectly through prison pen pal sites or friends on the outside. From what we know about him, he is dangerous and we felt our family and the community was at high risk should he learn our identities. He expressed no true remorse and had no knowledge or interest in the family he severely impacted. At this juncture, with the assistance of Michelle S. Cruz, Esquire, and former Connecticut State Constitutional Victim Advocate, we were able to exercise our rights at this parole hearing.

The usual method was to enter the hearing room, be required to enter your name on the record, and read your impact statement. Next, the hearing officers would go into executive session by leaving the room, confer for a few brief minutes, return to the room and announce their decision, shake your hand and thank you for coming.

There was a lot of negotiation with the Administrator/Executive Director that our rights had to be considered and we must not be forced to provide our names. An initial compromise was to say our relationship; widow, eldest child of, etc., with the caveat that we would have to enter our names on the website. We objected to that as well for obvious reasons. With more back and forth bantering and consulting the Chairman of the Parole Board (a former police captain in a major city) we would be designated as Victim #1- #2- #3

I must reiterate that each family member within a unit deals with this situation differently. They are all different in personality, coping styles and tolerance levels. That being said, the majority of my family just wanted it over and let’s forget the details. However, my mindset and my attorney’s, was we need to know everything in order to be prepared. We were ready and able to take charge and make changes happen, and we did.

The Outcome and the Power of the Victim Impact Statement!

After the executive session conference was completed, we heard the Chairman say, the perpetrator was denied parole until 2018 – five years later. We were emotionally and physically exhausted, but so relieved.

Reportedly, the denial was issued because of the hideousness of his crimes as well as the true impact of our statements. Another victory for the power of the Victim Impact Statement.