Coming Full Circle with a Legacy 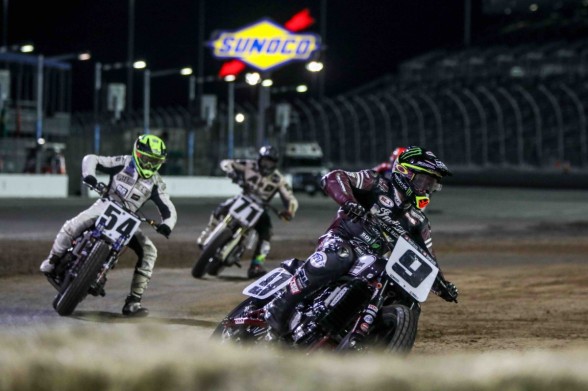 Sometimes a person’s past crosses path with future generations to create something very special. Such was the case during Christmas when I was witness to a rite of passage that dealt with a part of my Dad’s legacy as a former New England Motorcycle Rider and Champion of hundreds of competitive races.

At times, we all re-gift an item when we think that others can utilize or appreciate it more as the recipient. However, this was more than a simple re-gifting.  Before I reveal this 60 year old item which has withstood the test of time, let me acquaint you with the affiliated organizations and some history.

According to one of my Dad’s best friends and fellow rider who now lives in Alabama, my Dad primarily participated and excelled at the following:

Scrambles (Cross country or hare scramble races are off-road competition events. All riders in a single class start on the same row and the event is an all-out race to the finish. They are conducted on several-mile-long marked courses through woods or desert and over rugged natural terrain). Half track and Short track (i.e-quarter mile) competitions as well as Enduro. (Enduro is an endurance test between the rider and the terrain. Enduro racing is physically and mentally demanding as the rider endures low-hanging tree branches, fallen logs, rocky upgrades, splashing through streams and riding up and down hill on gravel, dirt, sand and even mud for long distances). Motorcylcle jumps (See YouTube Video below)

As of this writing, I could find no formal documented history of the New England Riders Association. Today they list 1,172 members. However, I know it has been around for 60+ years for the love of motorcycle riding and the respect for the sport.

“New England Riders is a self-organized, inclusive motorcycle group whose members are known for their love of “time in the saddle.”

“Despite having no dues, membership, rules or officers, the NERDs plan regular group rides to some of New England’s finest destinations. The discussions on

New England riders is a non-profit organization  and does accept donations to help fund the events. The New England Riders community welcomes all makes and levels of riders. Due to the mileage we put on our machines in all kinds of weather, the majority of the NER membership favor touring, sport touring, cruising, and ADV motorcycles. Courtesy, respect and safe group riding technique are valued attributes amongst the NER community.”

Forging Paths Where the Faint of Heart Don’t Go

Among the many events, there was trail riding, hill climbs, paved track racing, many rallies and regular road riding. My Dad rode dirt bikes on trails where there was none.  It took skill, agility, and fearlessness. Races were captured on 16mm film in those days. My brother is the keeper of many glossy black and white  photos, a treasure trove of the era. Here’s a more current YouTube example of what Connecticut dirt bike hillclimb riding requires:

And there were ramp jumps; yes! I remember my Dad up in the air “…flying through the air with the greatest  of ease, that daring young man on the flying trapeze, his movements were graceful, all people he could please…. “

Watch this- (No doubt, 55 seconds of terror for some!)

In dirt track racing the course is usually an oval, where only left turns are made. The racer uses his left foot as an outrigger to balance the bike as it’s leaned far into the turn, much like a road-racing motorcyclist uses his knee sliders to aid cornering.  The steel shoe, or hot-shoe is an integral part of flat track racing.

I recall my Dad’s steel shoe being somewhat rudimentary, although a vital piece of equipment on the flat tracks, compared to the lighter weight, more high tech versions of custom boot wear today. My Dad’s friend related that he was the only racer to use steel shoes on certain tracks as compared to his colleagues. In fact, he constructed his own steel shoes from an old Plymouth car bumper.  Refer to this blog in which a rider turned artisan meets the need- https://irontradernews.com/a-proper-steel-shoe-is-the-racers-edge/

On the Cover of Motorcycle Magazines

Unfortunately, I can’t display the actual cover in which my Dad was featured in Cycle Sport and other magazines of the 1950’ and 60’s. However, a couple of vintage editions that are similar mentioned articles about my Dad within the magazines were these available for purchase online by a collector with descriptions.

There are certain achievements recognized worldwide. To name a few; the Pulitzer Prize, appearing on Oprah, lecturing at a TedTalk, etc. But, in my Dad’s era, to truly have  made it to the top with his athleticism was to have raced on the former TV series, “ABC’s  Wide World of Sports”.  He did so, I believe, from Daytona Beach, Florida in the 1960’s. The series ran from April, 1961 to January 1998.

To be known among the best racers the world, what a milestone! We watched this show every Saturday night. As a family,  we attended many of his races all over New England on Sundays to cheer him onto victory. It was exciting to see all of the racers round the corners at high speeds with steel shoes helping to balance the bikes. His motorcycle, with the big, bold, black #47 emblazoned on the front won nearly all of the races or came in close to #1 with his friend and rival, Charlie Vincent winning many races as well.

One of the hallmarks of being a New England rider was to proudly wear their duds; whether it be a classic leather jacket, leather gloves, boots, homemade steel shoes, or a sporty racing jacket. In fact, the coat I will describe looks very similar to classic college varsity jackets.

At some point in time after my Dad’s murder, my brother Scott inherited various items.    I did not know that the vintage jacket, characterized by a navy blue color with bright yellow lines at the bottom and length of the sleeves (resembling the yellow lines of the roadways), snap yellow buttons, and the rider’s name embroidered on the left chest was the  signature jacket worn in the 1950’s and 1960’s by these consummate athletes. 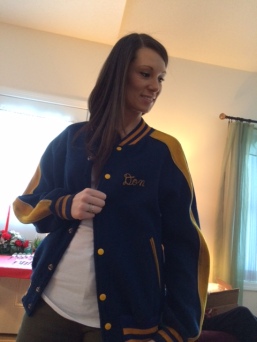 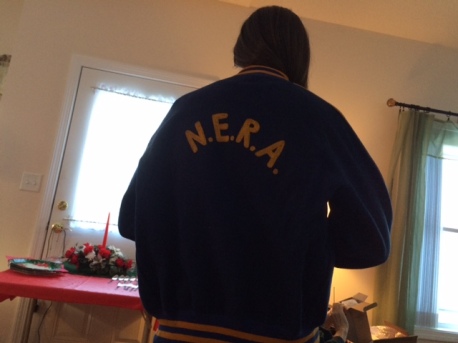 And so, at Christmas 2017, a classy and stylish “millennial niece” was given this vintage jacket as a gift from my brother.  Whether it hung in the closet too long, whether it did not fit him any longer, or whether it was just time to pass it on to another generation, I can’t say.  But, I was impressed. After a little dry cleaning, perhaps the good people of Denver will see this coat proudly worn by the one and only grandchild my Dad never knew. I hope she recognizes the significance. I hope that my Dad’s fans, will smile and look toward heaven! See the photos of Cara, “modeling” his jacket below.
References-