Broken hearts is the stuff of romance novels, movies and soap operas…

“The only thing a boyfriend was good for was a shattered heart.” –

“A broken heart is just the growing pains necessary so that you can love more completely when the real thing comes along.” ― J.S.B. Morse, “Now and at the Hour of Our Death”

“Doctoring her seemed to her as absurd as putting together the pieces of a broken vase. Her heart was broken. Why would they try to cure her with pills and powders?” 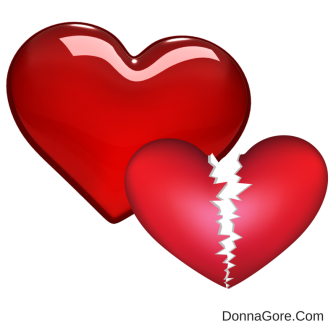 Literature and fictional portrayals aside, there are many aspects of society that cause a true broken heart.  The most familiar is the romantic sense. I’ve been there a couple of times and it took such a long time to recover, I chose not to entertain the possibility again. It is a grief no one wants. As the walking wounded person, you want to insulate yourself from everything and everyone, aimlessly looking for purpose again. However, the walking wounded do recover and can flourish again.

However, there are true broken hearts of the physical variety.  This is a bona fide medical condition which has several names. One is “broken heart syndrome,” Another is “apical ballooning syndrome.” Still other terms are “stress induced cardiomyopathy” and  takotsubo cardiomyopathy.”

It all began in 1990 with a Japanese physician who took an image of the heart of an afflicted patient and thought that it resembled the shape of a “Tako-tsubo” the name for a ceramic pot Japanese fisherman use to capture octopus. 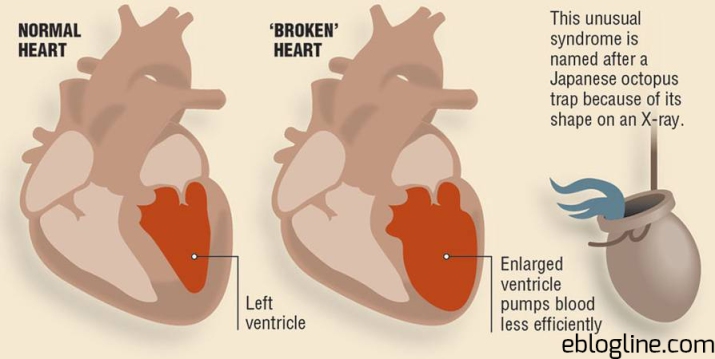 What happens?   Symptoms begin with chest pain and shortness of breath and can mimic a heart attack. The disruption of heart pumping, known as a “stunning” or a surge of stress hormones is actually acute heart failure caused by a lack of female estrogen hormones which are short-lived in nature. The left heart ventricle is the main chamber pumping the blood OUT of the heart to the remainder of the body. It temporarily cannot pump the blood forward, resulting in poor circulation, shock, or death.

This condition differs from a heart attack in that a traditional heart attack causes a nearly complete or full blockage of a heart artery due to a blood clot resulting in the narrowing caused by fatty buildup (atherosclerosis) in the artery wall. Broken heart Syndrome blood flow is reduced, not blocked. Other cases have been reported after general anesthesia, transplantation surgery, general surgery.

Complications can include accumulation of fluid into your lungs (pulmonary edema), Low Blood Pressure, Arrhythmia, or Heart Failure.

Women are Most Vulnerable

The incidence of Broken Heart Syndrome is far greater for women, 90% as compared to men;

Cardiologists are now more aware of it with  approximately 5% of women being evaluated for a possible heart attack;

Those with a previous neurologic condition such as seizures, of brain injury or are at greater risk of broken heart syndrome;

Irrespective of it’s initial serious nature, medical documentation from several sources reveal that Broken Heart Syndrome is often rapidly reversible to normal, usually within 14 days. Most patients recover with no long-term damage within a month. And, there is only a small chance that BHS will recur. There is no proven therapy to prevent BHS.  However, eliminating stress is the most common recommendation for prevention.

Medical experts believe that there is a strong connection between brain functions affecting the heart. In fact many seemingly healthy people have suddenly died during a disaster- traumatic event.  Such causes are still not fully understood. Apparently, the media has not  made the connection when reporting these events.

A mother’s quest to find the truth about her murdered son! “The systems”  failed Judy Rust over and over. She needs peace in her heart about her son, former Sgt. Patrick Rust who was murdered in 2007. Numerous injustices occurred over time with this still unsolved case.  Rather than peace, she experienced Broken Heart Syndrome after the murder of her son which she shares on this recent Shattered Lives Podcast.  We wish her continued better health and answers to  resolution for this case!