But for the Grace of God Go I: The Cold Case of Leah Ulbrich 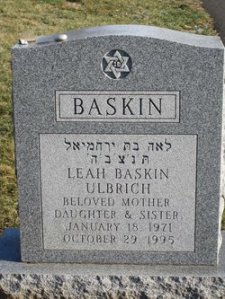 When there just isn’t much evidence or many leads to hang your hat on, cold cases can be fraught with speculation, innuendo, false assumptions, “victim guilt by association “and lack of focus.  Cold case investigators are a special breed, in that they are charged with unearthing information that is seemingly “not there” and finding that “golden nugget” that will turn the tide.  Moreover, when a victim has a past filled with struggle and challenges, those struggles often “become the victim” in the eyes of the law rather than the person the family knew.

A vicious and brutal crime took place on October 29, 1995 beginning in Hartford, CT and ending in Wethersfield, CT. Essentially, a dragging by car took place that can only be described in horrendous terms, which brought 24 year old Leah Ulbrich’s young life to an end!  Few specific details are known of the circumstances of the crime.   We know that the victim was a caring single mother who was very intelligent, possessing talents in the arts who got caught up in drugs and proceeded to more hard core drugs. She experienced a downward spiral with many attempts at rehabilitation. Just prior to her death, Leah was proud of her accomplishment of a year benchmark of being clean and sober.

In the location where Leah’s body ended abruptly on the curb, at the Hartford/Wethersfield line, the neighborhood is  described as follows: Jordan Ln / Ridge Rd is a suburban neighborhood (based on population density) located in Wethersfield, Connecticut.

Jordan Ln / Ridge Rd real estate is primarily made up of small (studio to two bedroom) to medium-sized (three or four bedroom) single-family homes and apartment complexes/high-rise apartments. Most of the residential real estate is occupied by a mixture of owners and renters. Many of the residences in the Jordan Ln / Ridge Rd neighborhood are older, well-established, built between 1940 and 1969. A number of residences were also built between 1970 and 1999.

Jordan Ln / Ridge Rd is also special linguistically. Significantly, 5.7% of its residents five years old and above primarily speak Italian at home. While this may seem like a small percentage, it is higher than 99.6% of the neighborhoods in America.

Wethersfield Avenue is just on block from Franklin Avenue in Hartford known as “Little Italy,” known for its fine restaurants, bakeries and pizza places.

Painting A Picture: Could This be a Possible Scenario?

Leah had been discharged, successfully completing her addiction rehabilitation program at Elmcrest Hospital (now Rushford Center) in Portland, CT. However, her specific place of residence just prior to her death was unknown to her family.   Leah was on the threshold of getting her life together “on the outside” and by all accounts, was a caring mother.  However, could she have relapsed again, left to her own devices? Could she have met up with “an old friend” who sent her in the wrong direction that night?  Did she have the urge to feed her previous habit and been solicited by the mysterious and evil stranger or “former friend “in the car  in which an argument ensued?  Leah tried to flee and exit the car, but part of her body was caught in the seatbelt. The fact that she was in the car with her seatbelt attached, leads me to believe that this probably was not a “chance encounter. Perhaps she felt safe, comfortable with this person.   Have you ever met a stranger who gets you into their car and asks you to fasten the seatbelt?  However, her family believes, as do I, that the murder may have been a “crime of opportunity” i.e. unplanned.  Leah may have turned down advances, or a drug deal gone bad and desperately tried to flee when the perpetrator would not let her go.

According to her father, Robert Baskin of Maryland, Leah was dragged half in, half out of the car for FOUR miles from Hartford to the adjacent town of Wethersfield . Her body was found with extensive injuries at the curb on Jordan Lane in Wethersfield  by a Hartford Police  officer who had been following a car with Leah as occupant after a 911 call.  Can anyone envision such a scene? I cannot!

For the Record: Known Facts: 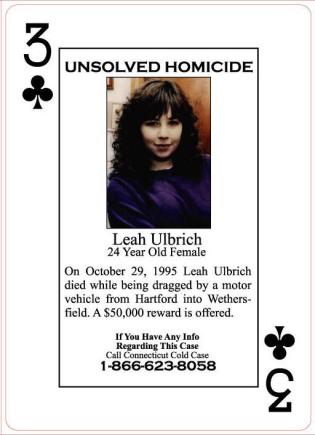 FYI: Cognitive abilities are often categorized as different kinds of intelligence depending upon the part of the brain used.  In general, cognitive skills are brain-based skills we need to carry out any task from the simplest to the most complex. They have more to do with the mechanisms of how we learn, remember, problem-solve, and pay attention rather than with any actual knowledge.

Questions, questions and more questions, leading to the need for more answers. I do not profess to hold the key to this crime. However, perhaps collectively, we can assist the Ulbrich family!

“Our dead are never dead to us, until we have forgotten them.” George Elliot.

Ryan Ulbrich and his family are a testament that Leah is not forgotten!

Disclaimer: The comments expressed on this website or on the broadcasts of Shattered Lives do not necessarily reflect the opinions or beliefs of the hosts, producers, or other guests.

But for the Grace of God Go I: The Cold Case of Leah Ulbrich