“The Lady Next Door”…Whose Life Ended By Anthrax

And that’s only part of the story…

Certain qualities stood out about her… Prior to her marriage, she was so private that she refused to enter any future plans in her school yearbook. A friend states, although she was unusually kind, “Her business was her business and if she wanted you to know something, she’d tell you.” Ottlie loved children (But had no children of her own). She willingly supported friends who were grieving, saying, “If you need to cry, I’ll cry with you. I know what you’re going through.”

Ottlie was referring to her unwavering love and tender loving care for her former boss turned husband, who had multiple sclerosis. He became increasingly debilitated…using canes and then crutches and progressively was barely able to walk. Ottlie sat in the lobby reading a book and attended to his needs so that he could continue to work. Relatives said, “They didn’t waste words… they were both private, but madly in love. You could tell.”

No one had any idea they were dating until they announced plans to marry!

At age 70, after her husband died, there was a turning point in Ottlie’s life…. She pursued swimming at the YMCA and new friendships for lunches and dinners.

Mrs. Lungren had consistently tornher junk mail in half prior to disposal… The fact that she was “a pioneer woman” of her era is in stark contrast to dying of inhalation anthrax (initially diagnosed as pneumonia).

One theory of the 2001 event concerned how a lone 94 year old Connecticut resident fell prey to such a death. That theory was cross- contamination of postal machines handling her regular mail and bulk mail passing through the postal center in Trenton, New Jersey crossing with highly contaminated mail meant for Senators Tom Daschle and Patrick Leahy.

Historical Overview of the 2001 Anthrax Attacks:

Was the FBI correct in their conclusions? Some say “No.” A brief except follows:

 
Department of Justice
Office of Public Affairs
FOR IMMEDIATE RELEASE
Friday, February 19, 2010
Justice Department and FBI Announce Formal Conclusion of Investigation into 2001 Anthrax
Earlier today, representatives of the FBI and Justice Department provided a 92-page investigative summary along with attachments to victims of the attacks, relatives of the victims and appropriate committees of Congress. This document sets forth a summary of the evidence developed in the “Amerithrax” investigation, the largest investigation into a bio-weapons attack in U.S. history. As disclosed previously, the Amerithrax investigation found that the late Dr. Bruce Ivins acted alone in planning and executing these attacks. 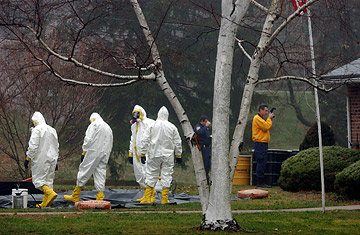 Returning to Ottlie Lungren…
Ottlie Lungren was a generous but extremely private individual her entire life…. The fact that there were hoards people examining her every move and possession following her death would have sent her into a tizzy, no doubt about it!

The Questions of How and Why?
Ottlie was of advanced age…She had a habit of tearing her junk mail in half in a meticulous manner (not unlike Ladyjustice…Yikes!). Even our former Governor, John G. Rowland, (Governor of Connecticut at the time) http://www.justice.gov/opa/pr/2010/February/10-nsd-166.html recently speculated on his radio show that that she may have held her mail close to her face in order to see the print…and thereby inhaled the anthrax on her mail. With probable deteriorating vision at age 94, this would seem like a likely scenario…essentially creating “the perfect storm”.

Connecticut’s state epidemiologist (expert dealing with the detection and sources of disease in large populations) Dr. James Hadley, advised during the height of the crisis to “open your mail gingerly.”
If only…. May you rest in peace, Ottlie!