There are few things more horrific than serial killings.  One such story is told through the “lenses” of Communist Russia and one very dedicated forensics expert, Viktor Burakov, doubling as a police investigator.  The story of the most notorious and most prolific serial killer is portrayed in this HBO production movie in the year 1995.  One Andrei Chikaitilo was the killer who masqueraded as an unobtrusive bookish man who “kept to himself.”  In actuality, nothing could be further from the truth… 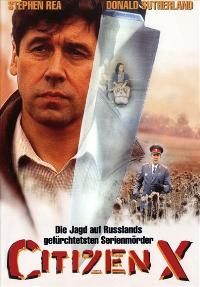 According to Amazon reviewers, speaking about the book, “The Killer Department” upon which Citizen X was based, Chikaitilo was incompetent at life.  He became a schoolteacher “around 1976” after which he was fired for sexually assaulting a female student.  Following his “teaching career,” he moved on to a menial assembly job in a train plant in order to support his family in Rostov.  As reviewer Mark Hill put it, “Pick up a deck of playing cards and count them. Put them down and know for a fact that this is how many people Andrei Chikaitilo murdered between 1978 and 1990 before he was caught.”

The highly restricted government, “save face” mentality at all costs and police incompetence served as the backdrop.  Their answer to incompetence was simply to assign more and more men… quantity versus quality… until Viktor Burakov arrived on the scene.

As the movie tells, the victims were “throw away young people”- girls and boys and young adults who were orphaned, homeless, prostitutes or drug addicts that Chikaitilo felt he could easily dominate.  Supposedly, Russian children are taught to respect and trust grownups…no matter what…Which ultimately enabled Chikaitilo to be “so successful” in luring so many children to their deaths.

Eight bodies were discovered initially, in a desolate forest near a remote train station. These victims were bribed with candy, alcohol and the promise of cigarettes.  Andrei’s sexual predilections were so perverse and heinous that he reportedly would bite off anatomical parts to achieve fulfillment.  Such exploitative details are not shown in the film, nor are they necessary to convey the message.

What is so effective about this movie is the dark portrayal of Communist society as revealed through the acting of Joss Acland, “The Commissar.” Viktor Barakov is played brilliantly by actor Stephen Rea, the much tormented, analytical and intelligent forensics expert/police investigator. In fact, Rea’s character suffers a nervous breakdown with eight years of unrelenting stress.  Had it not been for the “cracks of humanity” exhibited by the Colonel (played by Donald Sutherland), who supported Barakov “in secret,” this horrendous serial killer might have continued his rampage even further beyond his 52 victims over 8 year’s time.  Another little known secret rests with the personal life of “the Commissar” which turns the tide-serves as blackmail in the name of justice for the dedicated and long suffering Barakov.

According to reviewers of the book, “The Killing Department” and the similar, “Red Ripper,” the psychiatrists were stymied. [Admittedly, LJ started one of these books a few years ago and couldn’t get past the Russian political history without excessive yawning!]

In the movie, one reluctant but courageous psychiatrist had a breakthrough after hours and hours of attempted interviewing. And then…  “It all came tumbling down” as in one version of the nursery rhyme.

One psychiatrist, in an attempt to analyze Andrei Chikaitilo’s behavior spoke of the “preposterous factor” which was explained as “We can all understand why some people kill their friends and relatives.  Those are people we care about whose opinions of us we value.  They’re in a position to hurt us, and we must live with them… ‘But complete strangers?”

[LJ- when it comes to rape and murder, there are no valued opinions…They’re long gone…  And… we do not have to live with them.  Get the “Time’s Up” Book!]

Suffice it to say that the ”Citizen X” movie tells a gruesome story in a riveting manner for 102 minutes, minus the gore… and very little glory!

For a trailer of the movie go to: http://www.youtube.com/watch?v=XYtvCXrVsrM&feature=related

To purchase the DVD, go to: